Not only representing the typical representative of Vietnamese architectural style in the neo-classical period, An Dinh Hue palace is associated with the story of the life of Queen Nam Phuong – the last queen of the Vietnamese feudal system. Male.

This 100-year-old ancient palace is one of the attractive tourist attractions in Hue, attracting a large number of tourists to visit.

The following article provides some information about An Dinh palace in Hue , hopefully it will be useful for you in your upcoming exploration of Hue ancient capital.

Where is An Dinh Palace?

Through the ups and downs of time, An Dinh Palace currently has only 3 intact buildings, namely the main gate, Trung Lap communal house and Khai Tuong floor.

Instructions to move to An Dinh Palace

Because it is located in the center of Hue city, moving to An Dinh palace is relatively easy. Visitors can choose private vehicles, taxis or cyclos to move around.

History of An Dinh Palace

An Dinh Palace was built in 1917, is a unique artistic architectural work of the Nguyen Dynasty, with European style combined with traditional royal decoration.

During the reigns of Emperor Khai Dinh (1916-1925) and Bao Dai (1926-1945), An Dinh Palace was the place where royal receptions and celebrations were held with the participation of family gods and officials.

After nearly half a century of being forgotten, under the influence of time, war and human indifference, the beauty of An Dinh Palace was covered up or even destroyed.

Since 2002, An Dinh Palace has been transferred to Hue Monuments Conservation Center for management and restoration to restore the inherent beauty of the magnificent castle in the early twentieth century.

With a total area of ​​​​nearly 24,000m2, the ancient palace is a complex of many different works. Currently, the palace has 3 buildings still standing: the main gate, Trung Lap communal house and Khai Tuong floor.

This work has attached to many royal figures at the end of the Nguyen Dynasty such as King Khai Dinh, King Bao Dai, Prince Bao Long, Queen Doan Huy and especially Queen Nam Phuong. Her real name is Nguyen Huu Thi Lan, used to be a famous woman from Annam.

However, her marriage experienced many ups and downs. As an educated woman, she chose to live quietly with her mother-in-law in the palace and take care of her children, in 1947 she moved to France to settle down with her children and live there.

Who was in An Dinh Palace before?

This place used to be the private palace of King Khai Dinh and King Bao Dai. Dubbed “the hundred-year-old pearl of Hue”, An Dinh Palace was “turned” by the 5th Gia Gia Lam Chieu 5 team into the lavish Bach Tra Vien Palace, the regal of the 3 Ly family sisters, where the event took place. most of the main scenes in the movie

This story is also reproduced by female singer Hoa Minzy in one of her music videos, bringing great resonance as well as bringing this place closer to everyone.

Considered as the opening work for the period of Hue fine arts, the interference between two different cultures of Asia and Europe in the early 20th century, An Dinh palace is decorated with details such as the four quarters, four spirits, bowls and bowls. The columns are designed in the Roman style, etc., all in a luxurious and sophisticated European direction.

In addition to the female singer’s MV introduced above, An Dinh Palace also appears as a large and luxurious villa located separately from the outside world, without phone waves in the movie “The old girl has many tricks”. .

Discover the unique architecture of An Dinh Palace

The main gate of An Dinh Palace

As one of the most unique architectural features of the palace, the main gate is designed in the style of a three-way gate with two floors, the details around the gate are decorated with embossed porcelain that looks very impressive, and the top of the roof. on the big pearl icon.

The main gate has a single passage, to get inside you have to go through the big gate.

As the main work of the architecture of An Dinh palace, Khai Tuong floor was named by King Khai Dinh himself, meaning “place of good omens”.
The floor is divided into 3 floors, occupying an area of ​​​​about 745 m2, built in European style with many different materials (some shipped from countries).

The highlight in this floor is the murals with high artistic value. The most prominent are 6 paintings on the walls, although they are not on the same topic, it is the background of 5 mausoleums of 5 kings (except for the 6th picture).

Palace of An Dinh fares?

Opening time of An Dinh Palace

Currently, An Dinh Palace is a relic belonging to the Complex of Hue Monuments. Tourists can combine to visit other places in Hue ancient capital such as:

To An Dinh Hue Palace, visitors should note the following issues to make the trip more convenient: 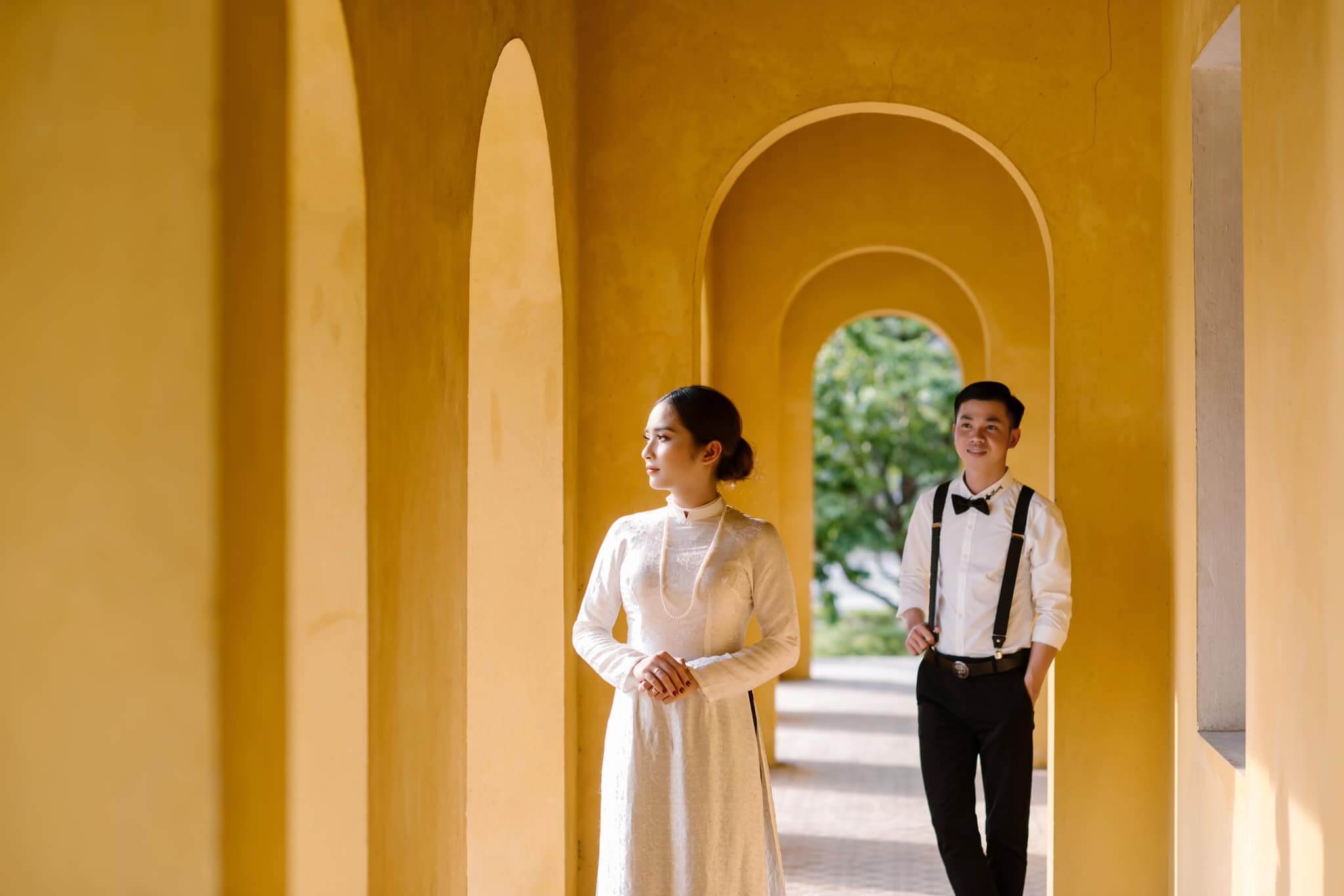 Review of An Dinh Hue palace of tourists

Very beautiful, worth a visit, each decorative motif shows the skillful hands of the craftsman, especially the place that appeared in Hoa’s song, I fell in love with it. Tickets are 50k, depending on the small area, but there are countless virtual living corners. Remember to dress very well to take pictures, I didn’t wear it so I’m so sorry to see a few couples taking wedding photos, it’s so beautiful here.

Very ancient, especially with many beautiful murals about nature in Hue.

The palace has many objects and historical images of the reign of King Bao Dai.

French architecture with white gold paint. In fact, An Dinh Palace is the place where I am most disappointed in the system of palaces and mausoleums that I visit in Hue. The space is also not much, the outside landscape looks a bit shabby looking like an abandoned house. It is forbidden to take pictures here, but I stood outside in the corridor to take pictures and the security guard didn’t let me. Can only stand in the garden shooting. Ticket price is 50k, seniors from 60 years old get 50% off.

The inside of the museum is not allowed, so I just stood outside to take pictures, the architecture and interior patterns are extremely beautiful

Previous postExplore Tu Hieu Pagoda In Hue: The ancient communal house of many pagodas in Hue
Next postExplore the Citadel – Hue Citadel: A place to keep the historical imprints of the Nguyen Dynasty kings