In the tourist attractions of Quang Tri , not mentioning La Vang is a shortcoming. Visiting La Vang holy land, walking around the campus, you will feel the comfort and coolness of big old trees. Sit in front of the statue of Our Lady to find inner peace and comfort. Or ask for holy water at the holy well of La Vang to pray for peace and happiness. Regardless of religion, you will still feel the peace of mind when coming here.

La Vang Sanctuary, also known as “Basilica of Our Lady of La Vang”, is located in an area formerly known as Dinh Cat (in the reign of Lord Nguyen Hoang in the 16th century, this area was called Dinh Cat, meaning the Palace built on an area). sandy soil is sometimes called Cat Dinh). Today belongs to Hai Phu commune, Hai Lang district, Quang Tri province. This place is about 6km south of Quang Tri Citadel and 60km north of Hue city. La Vang Sanctuary is the national Marian center of the Vietnamese Catholic Church. Every year, millions of people make pilgrimages to Our Lady in this sacred place.

Legend of the name La Vang

According to one theory, under King Canh Thinh Tay Son Dynasty had a policy against Catholicism. So in order to avoid the punishment of the Tay Son Dynasty, many parishioners in Quang Tri ran up to this land.

This is a remote mountainous area, so in order to communicate with each other, they have to “scream” loudly, and “loud” to be “sound”. The name La Vang was born from there.

Another explanation is that when the parishioners ran to this land when there was an epidemic, at that time Our Lady appeared and instructed them to look for a type of leaf called a leaf – drinking it will cure the disease. Write “leaves” without accents as La Vang.

The story of Our Lady of La Vang Epiphany

According to the documents of the Archbishop of Hue – 1998, during the reign of King Canh Thinh (enthroned in 1792), with a decree banning religion on August 17, 1798, some of the faithful near Dinh Cat Hill (now the town of Hue) Quang Tri commune) had to find a place to hide. They took refuge in the mountains of La Vang.

In the sacred forest with poisonous water, difficult circumstances, lack of food, disease, fear of military officers, fear of wild animals, believers can only trust in God and Our Lady. They often gather together under the ancient banyan tree, together to pray, comfort and help each other.

One day, while praying together to the Blessed Mother, they suddenly saw a beautiful woman with a wide robe, holding the Child Jesus in her arms, with two angels holding lamps on either side. They immediately recognized the Virgin Mary. She showed kindness, tenderness, and comfort to the faithful who were willing to work hard.

Mother taught me to pick a kind of leaves available around there, boil water to drink to cure diseases. She gave her promise again: “I have accepted your request. From now on, whoever comes to pray to me in this place, I will receive the grace of my will.”

After that, Mother appeared many times to support and comfort her children in need.

Since then, the event of Our Lady’s apparition in the mountains of La Vang, through the generations, has been spread everywhere. And many people who sincerely believe, come to pray to Mother and receive grace according to their wishes. Our Lady of La Vang is often symbolized by a woman wearing a Vietnamese ao dai…

History La Vang church was originally built on the foundation of a shrine to worship Ba (maybe Buddha Ba Quan Am or Princess Lieu Hanh) for forest people, a former thatched roof under a banyan tree and a four-sided fence. After the apparition of Mary in 1789, it was given to the faithful to build a place to honor Mary. 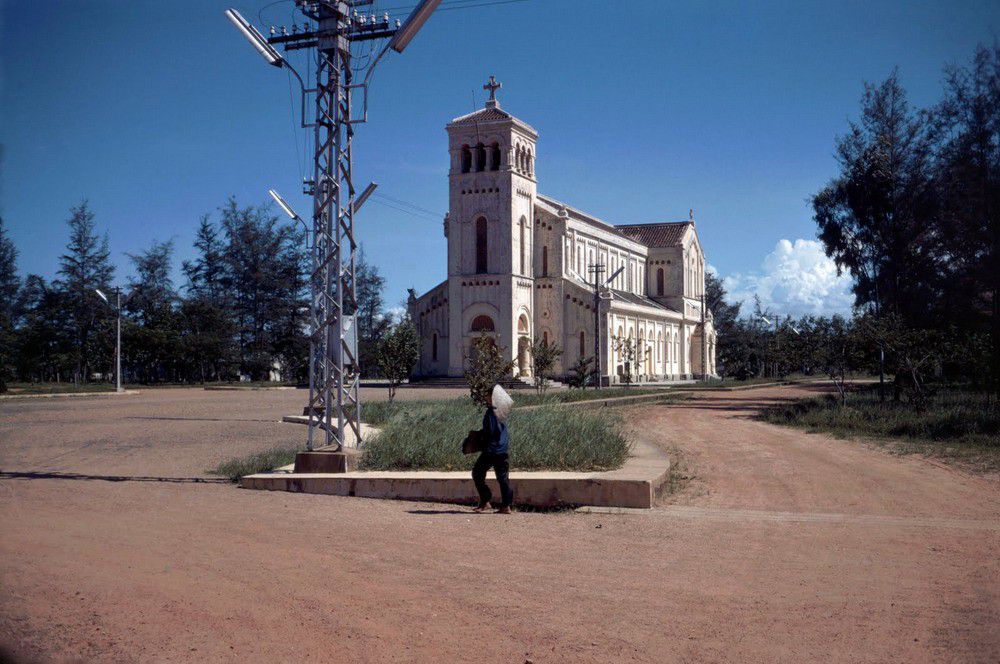 On August 15, 2012, the first stone laying ceremony took place to build the new Basilica. In terms of size, this is the largest work of the Vietnamese Church ever. The church is designed in the style of traditional Asian Asian architecture in Vietnam, with a capacity of up to 5,000 people. 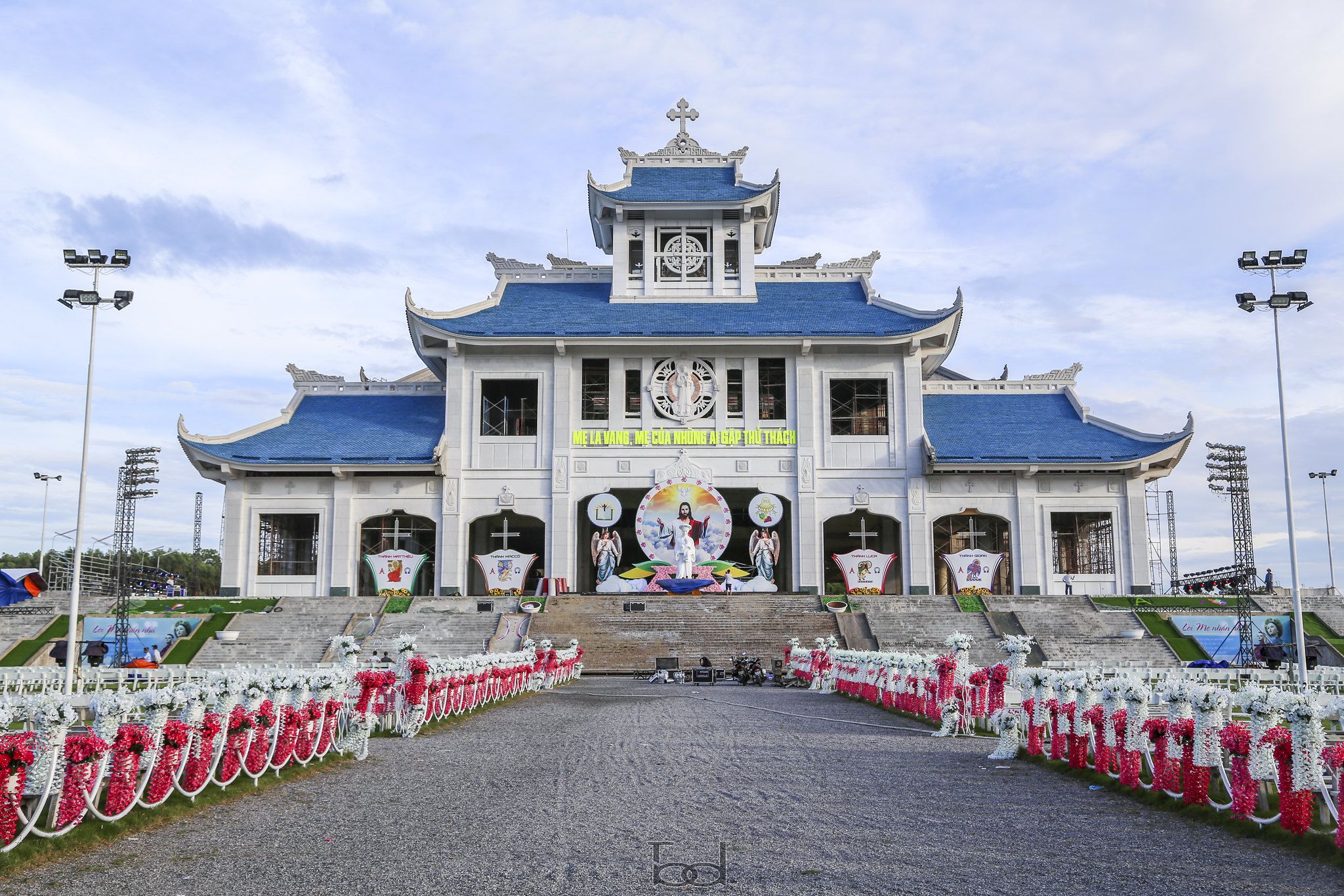 Our Lady is often represented by the image of a woman wearing a Vietnamese ao dai holding a baby who is also wearing a traditional Vietnamese costume.

In front of the bell tower of the Basilica of Our Lady of La Vang is a large square. On either side of the square is the Way of the Cross – a series of 14 sculptures, depicting the progression of Jesus’ passion, from his conviction to his crucifixion and finally his burial in St. catacombs.

In addition, within the sanctuary, there is also a well of Our Lady of La Vang, where each believer when coming here takes a sip of water to pay respect to Our Lady. Many believers believe that well water has the ability to cure diseases in the body.

Experiencing many ups and downs of history and time, up to now, La Vang Holy Land seems to radiate its ancient beauty under a corner of Hai Lang – Quang Tri.

Every year on August 15 in La Vang, people often organize a pilgrimage festival, called “Kieu” (every 3 years there is a large “Kieu”, called “La Vang Congress”). 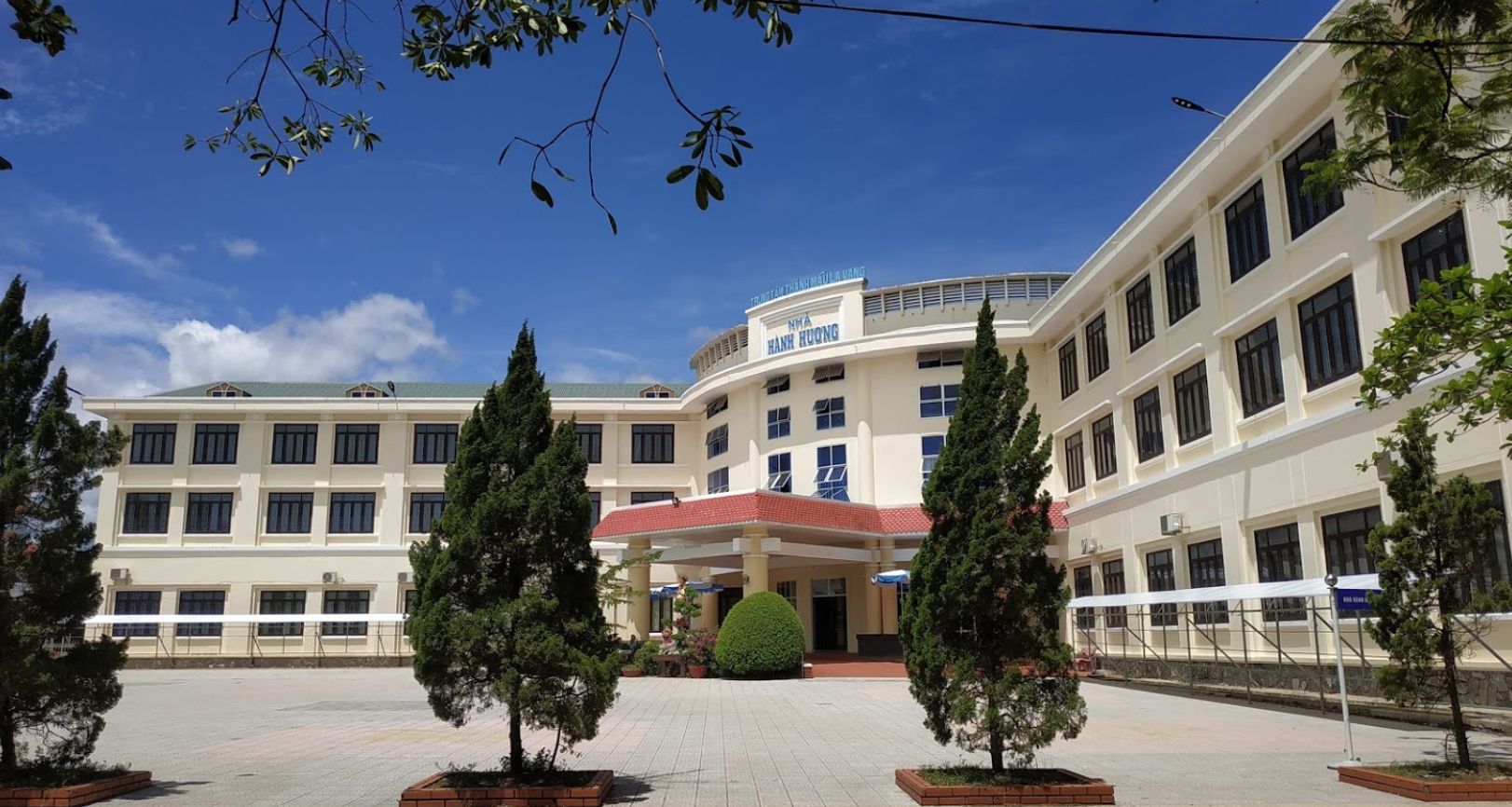 Pilgrims to this place can buy sage leaves, a type of leaf that is often used as a decoction or drink, which is cool, healthy and antibacterial, which is very good for women after giving birth. Not only that, visitors from all over the world come here to make pilgrimages and ask for blessings that Catholics believe that Our Lady will give them the grace they want.

After a hiatus, since 1990, the local government has allowed worship here again. La Vang has become the most important pilgrimage site for Vietnamese Catholics.

Traveling to Quang Tri , coming to La Vang, people feel like they are stripped of the worries in mundane life, and are relieved of the difficulties in life. When leaving, visitors feel at peace as being comforted, protected, encouraged, to build a better life together.