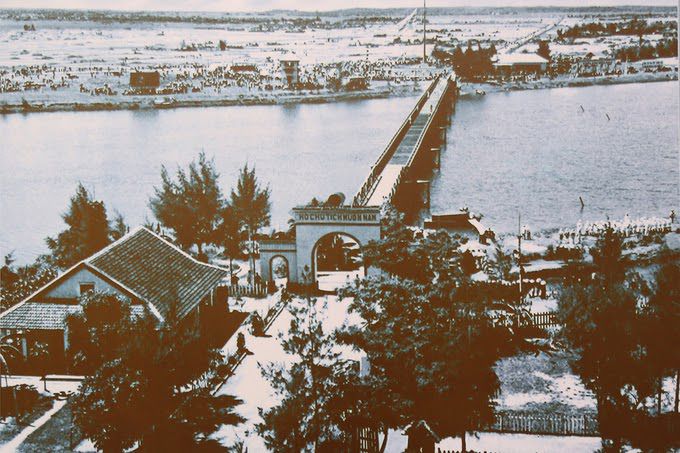 Hien Luong Bridge and Ben Hai River are located in the cluster of relics on both banks of Hien Luong at the intersection between National Highway 1A and Ben Hai River; the North belongs to Hien Luong village, Vinh Thanh commune, Vinh Linh district; The south belongs to Xuan Hoa village, Trung Hai commune, Do Linh district, Quang Tri province. These are two “historical witnesses” who carried the pain of dividing the country into North and South for more than 20 years. 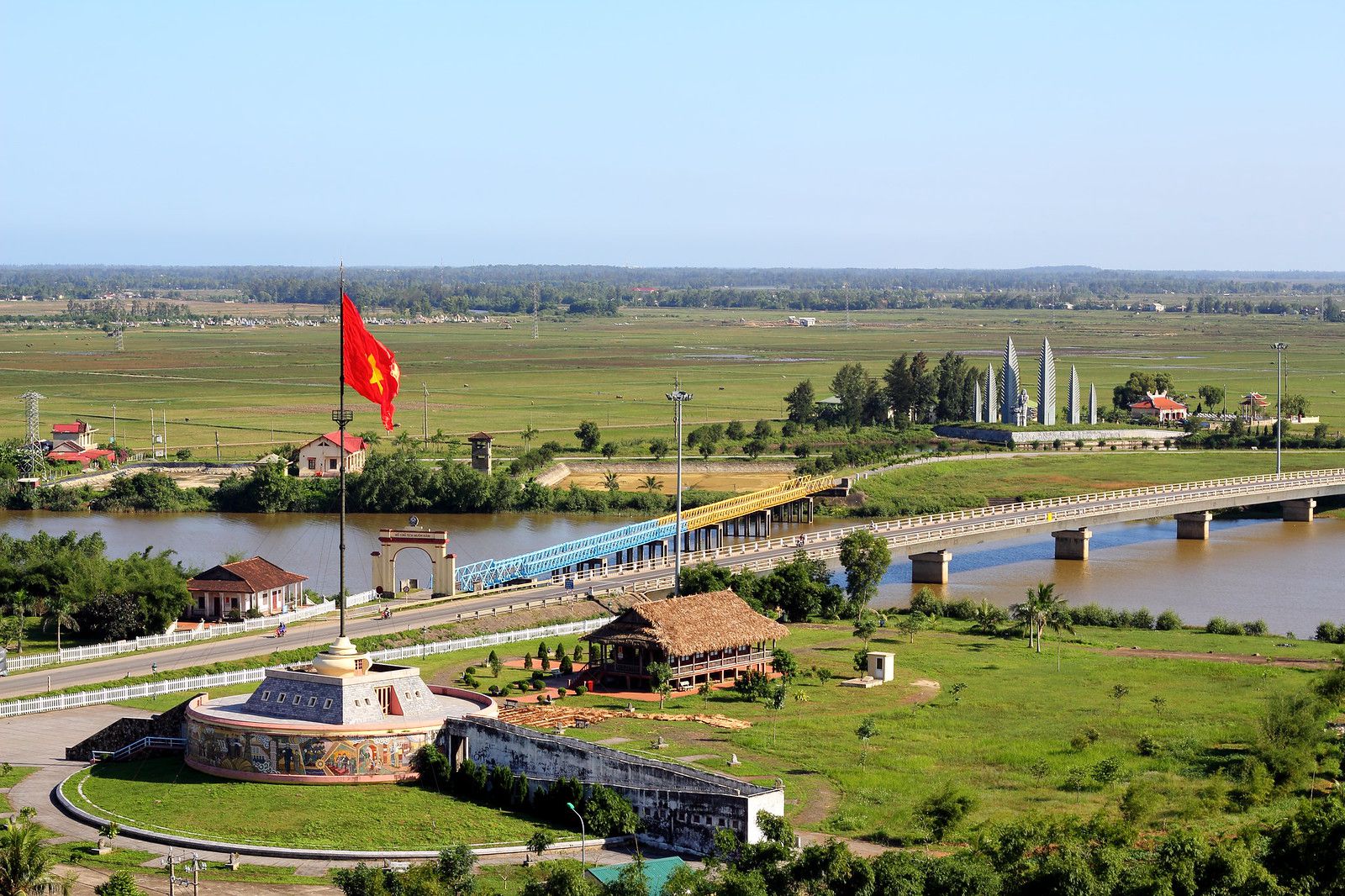 Ben Hai River originates from Dong Chan mountain in Truong Son range and flows along the 17th parallel from West to East and then flows to Cua Tung estuary. Ben Hai River has a total length of nearly 100 km, the widest place is about 200m, the narrowest place is about 20 -30m, is the boundary between Vinh Linh and Gio Linh districts of Quang Tri province.

Ben Hai River was originally named Minh Luong. During the reign of King Minh Mang, due to the coincidence of the word “Minh”, he had to abstain from the name of the King (the word “Huy” is synonymous with “Knight” which means taboo). Therefore, the name of the village and river were changed to Hien Luong. Ben Hai River is also known as “Ben Hoi” river, the local dialect “bald” means small river. 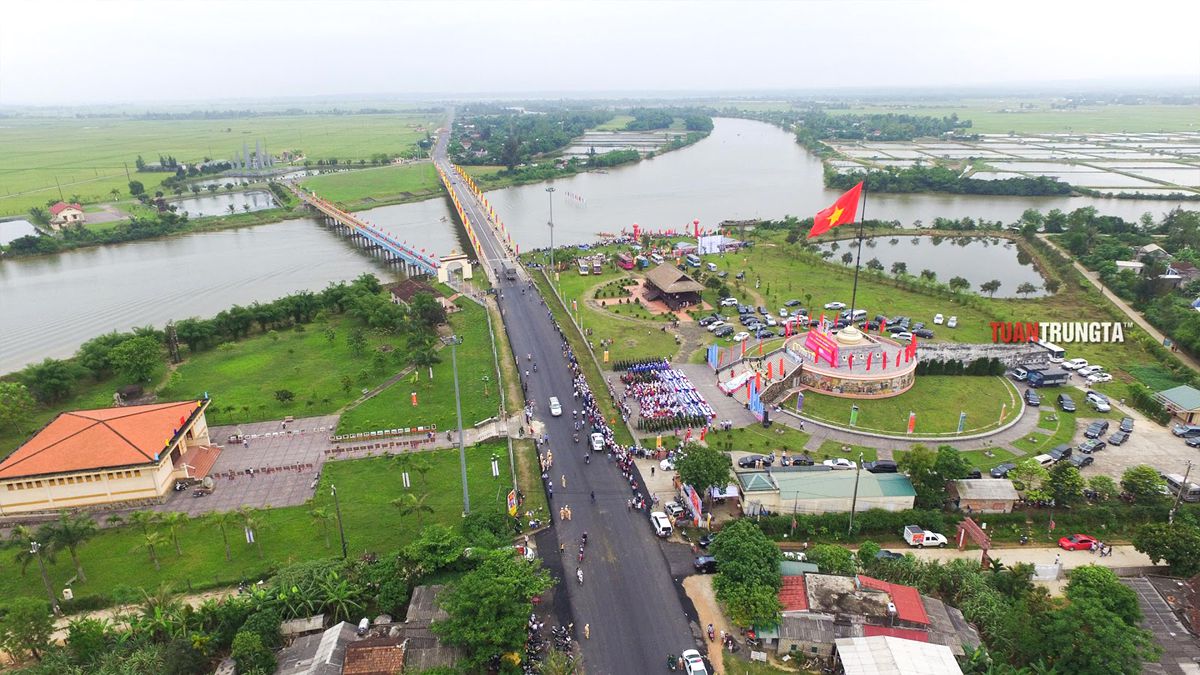 Hien Luong Bridge was built in 1928 by Vinh Linh Phu mobilizing people in the area to contribute efforts. At that time, the bridge was made of wood, with iron stakes, 2m wide, just enough for pedestrians. In 1931, the bridge was repaired by the French to be wider, but traffic still had to go by ferry to cross the river. In 1943, the bridge was upgraded, now small motor vehicles can pass. In 1950, France built Hien Luong bridge with reinforced concrete, 162m long, 3.6m wide, 10 tons tonnage. Two years later, the bridge was demolished by our troops to prevent the enemy’s attack to the North.

In 1954, after the defeat at Dien Bien Phu, the Geneva Agreement was signed. According to the Geneva Agreement, Vietnam was temporarily divided into two regions, taking the 17th parallel (Ben Hai river running through Do Linh and Vinh Linh) as a temporary military boundary. Hien Luong Bridge is divided into two parts, each side is 89m long, painted in two different colors. The North bank consists of 450 decking boards, the South bank 444 panels. The temporary schism was thought to last only 2 years and ended after the unification of the general election, but in reality it lasted for 21 years. 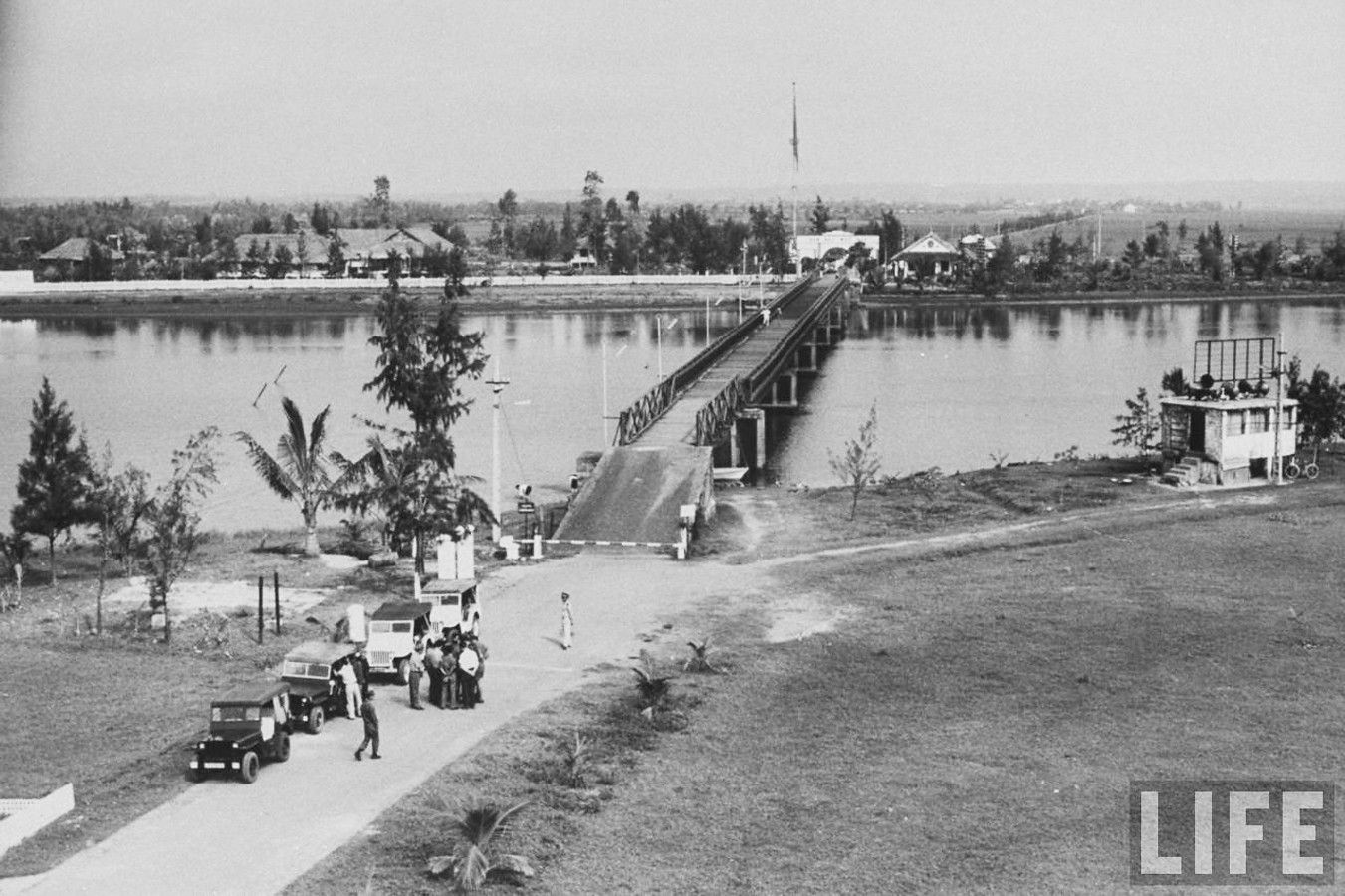 In 1956, Ngo Dinh Diem-President of the Republic of Vietnam with the backing of the United States did not conduct the general election to unify the country as stipulated in the Geneva Agreement. From here, Hien Luong bridge has become historical evidence for more than 20 years separating the North and South. The bridge also witnessed many events of tenacious and heroic struggles and became a great symbol of the aspiration for unification, reunion and reunion of many Vietnamese families and people.

In the wars that took place at Hien Luong, perhaps “Choi Che” was the fiercest and fiercest battle that took place during 14 years. Since the demarcation line was demarcated, the height of the flagpole has been continuously raised, because our flag cannot be lower than that of the puppets. 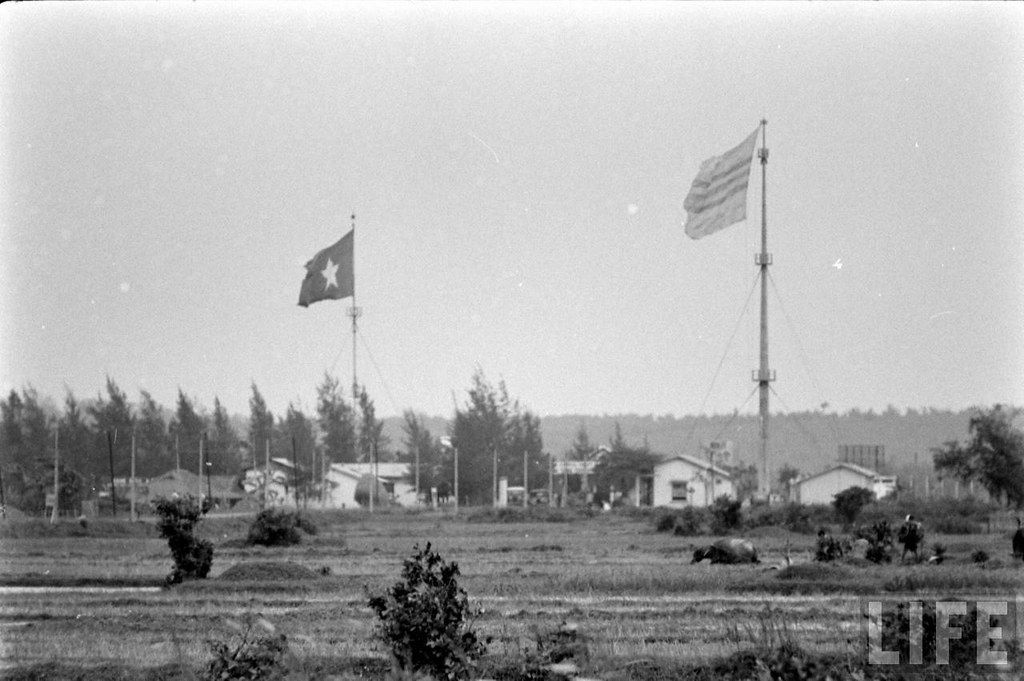 When the red flag with a yellow star was raised high, the people on both sides of the North and South cheered happily. The US and Wei were completely surprised by this event. They hastily raised their flagpoles to 35 meters.

Not to let our flagpole be lower than the enemy’s, in 1962 the government sent the Vietnamese machine assembly corporation to process a flagpole and then moved it to Hien Luong, the flagpole was 38.6 meters high, and the flag was raised 134 m2. weighs 15 kg. There is a cabin 10 meters from the top of the flagpole for our soldiers to collect and hang the flag. This is the highest flagpole on the line.

Continuously for many years, after each battle, the flagpole was broken, the flag was torn by bombs and shells, immediately a new flagpole, a new flag was replaced. From 1956 to 1967, the frontline police officers had flown 267 flags of all sizes.

The American puppet’s plot to divide our country is also reflected in the painting of the bridge. Hien Luong Bridge was rebuilt by the French in May 1952, 178 meters long, 7 spans, reinforced concrete pillars, pine wood deck, 4 meters wide. The South-North dividing line is a white painted line 1cm wide as the boundary between the two regions. Every day, the police and police of the two regions are on guard, changing turns to return in a combined mode.

To create an image of dividing our country, the US-Saigon government actively painted the southern hemisphere blue. But with the intention of “unifying the mountains and rivers”, they had just finished painting at the beginning of the day, but in the night, the police painted half of the bridge on the North bank in blue to blend in one color. Later, they let people repaint the southern bridge with brown color. Like that, Hien Luong Bridge always changes color. Whenever the enemy paints a different color to create two opposing colors, we immediately repaint it into a common color.

After the Geneva Agreement, in order to educate and encourage the people to fight for national reunification, we built a loudspeaker system, distributed in 5 clusters throughout the length of 1,500 meters on the north bank. Each cluster of 24 speakers type 25 W facing the south bank.

Annoyed by this incident, a few weeks later, America-Diem attached to the south bank clusters of loudspeakers manufactured by West Germany and Australia with large capacity, loud, overwhelming even our loudspeakers. In order to “fight words”, the US-Diem launched dangerous psychological warfare in Ben Hai. Every day they talk for 14 to 15 hours, one or two in the morning have turned on the speakers at full capacity. 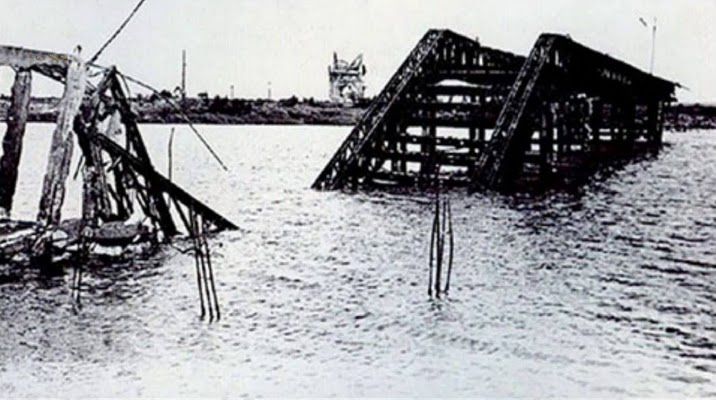 The 21-year resistance war on the banks of Hien Luong is a resistance war against the US to save the country full of sacrifices and hardships of our army and people. The country reunified peacefully, the dead, the survivors; But the merits of the army and people in the border area are recorded in history books. Until today, when coming to this land, we still see a heroic and extremely vivid past appearing before our eyes. In December 1986, the relic site on both sides of Hien Luong was ranked at the national level. In 2001, Hien Luong Bridge was restored to its original design according to the design of the old bridge, 182.97m long, including 7 spans, ironwood surface with numbering of each plank.

The relics of the two banks of Hien Luong include: Hien Luong Bridge, Ben Hai River, the flagpole on the North bank, the Union house, the police station at the border line, the loudspeaker rig, the Aspiration for Unity monument cluster on the South bank, the house. Museum of the 17th Parallel…

The exhibition house “The 17th parallel and the aspiration for reunification” (Vinh Thanh commune) consists of 2 compartments. The ceremony space is where the statue of President Ho Chi Minh is located. The booth displays 53 documents and artifacts directly related to the fight of our army and people on the banks of Hien Luong – Ben Hai during the resistance war against the US for national salvation.

Documents and artifacts are classified under 4 themes: the Geneva Agreement and the temporary military demarcation line; The unyielding spirit of Vinh Linh people and the fight to protect the front line; People in the South of the 17th parallel with the struggle for national unification; 17th parallel after the liberation of Quang Tri in 1972.

In particular, there is also a restored version of the 500W loudspeaker used by the Government and army of the Democratic Republic of Vietnam on the north bank before. Admiring this speaker, visitors will partly imagine the “speaker match” on the banks of the Ben Hai River from 1954 to 1965.

The relic of the two banks of Hien Luong has become a destination not to be missed in the Quang Tri travel itinerary of domestic and foreign tourists. Tourists come here to reminisce about a time when the country was divided, understand the strength of a people earnestly love peace, a will and aspiration to gain independence and freedom, to have a fresh Vietnam. as beautiful as today.

Transport To Hien Luong Bridge From Danang, Hoi An