For those who are dreame, Da Nang is a perfect choice, because Da Nang not only has the dynamics of a young city, the city of event also captivated. Danang Cathedral, also known as the chicken church or pink church, is one of them.

It can be said that the chicken church is one of the few architectural works left over from the French colonial period, bringing with it the old ancient features imbued with the time and lines of French architecture in the heart of modern Danang.

It was built in February 1923 on the vacant land of Rue du Musée (now Tran Phu street), Danang Cathedral was designed and built by Father Vallet. On March 10, 1924, through a very short period of time, the construction was completed, the church celebrated the dedication and inauguration.

As a typical work of Gothic architectural style, the Cathedral of Da Nang attracts visitors with its soaring lines and mysterious ancient caverns. The interior of the church is decorated with pictures and statues illustrating Bible events, similar to the motifs of churches in the West. In particular, the church is painted an elegant pink color, which is an eye attraction and impressed with those who have ever visited.

It is not famous on the city tour program, but not so that Danang Church is not widely known. In contrast, located on Tran Phu Street – one of the most beautiful and crowded streets in the city, close to the Korean market, it attracts a large number of tourists.

In the spacious grounds of the church, there are scenes and contexts that follow the biblical remains such as the caves of Mary, which are modeled after the model of Lourdes in France. Therefore, with its beautiful and peaceful beauty, this place is chosen as the favorite location for wedding photography of couples.

Once coming to Da Nang, try to visit the “pink fire spot” that warms the city, to admire the moss of time and French features in the heart of Da Nang. Come to hear my heart soften, and leave a the hustle of life out there.

Best Ways Travel From Hoi An To Hue

Bay Mau Coconut Forest – a new attraction in Hoi An

Transport From Chan May Port to Bana Hills Private Car 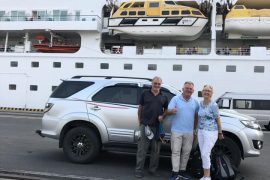 Transfer From Chan May Port To Hue By Private Car 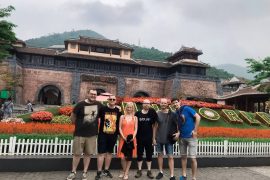 Transport From Hoi An To Bana Hills By Private Car